Back in the office today, armed with my trusty Thunderbirds thermos full of healthy broccoli and cabbage soup, as well as a very tempting tupperware containing a quarter of Si’s heavenly carrot cake (honestly, you have no idea of the self control it took to carry it on a 1hr tube journey and not even have a tiny nibble) to share with my colleagues.

The soup was grand – I jazzed it up with a teaspoon each of hummus, lemon and coriander hummus, and spicy red pepper hummus stirred in, which was very tasty – though it didn’t keep me full for very long. By half 2 I was investigating the Graze box that had arrived since the new year to see if any of the treats inside were vegan… annoyingly, very few were, though I did manage to find a ‘Smokin Protein Kick‘ – a little punnet of chilli lemon broad beans, almonds, hickory smoked almonds, and roasted pumpkin seeds. The smoked almonds in particular tasted great! But I suspect maybe I could work on my lunches to make them a bit more filling – more protein?

More news from the vegans in the office, my co-vegan Seema was sad today because she accidentally ate coleslaw (mayo – doh), but she’s picking up where she left off undeterred. Good on her! We were able to take her mind off things, though, with some vegan carrot cake 🙂

It’s funny – I think Si and I have been in our little vegan bubble a bit, as I hadn’t realised that lots of people are quite suspicious of vegan food – initially a few colleagues weren’t keen to eat the cake, but when Emily braved a slice and declared that not only was it delicious but you couldn’t tell there was anything different about it, everyone else quickly descended on the cake and it quickly disappeared. So quickly that I didn’t even get any! But never mind, Si and I did keep one slice back to have later. 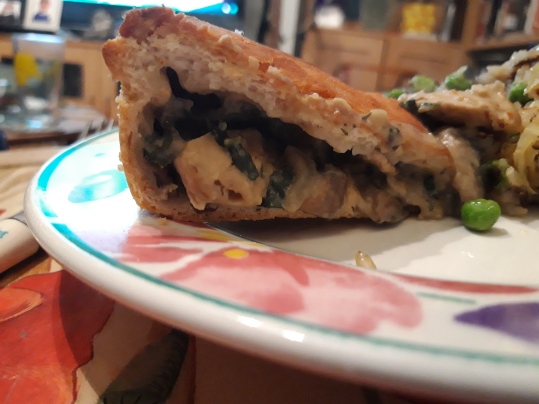 Travelling home (and nibbling the remaining crumbs from the cake – what, I’m allowed to now!), all I could think of was the dinner Si was working on – because tonight, gentle reader, is Pie Night. So much excitement. It was Si’s take on a chicken and mushroom pie, combining mushrooms, thyme, onions, garlic, cavalo nero, and some of the Iceland ‘chickn’ strips… he cooked all of these together and then put them in a really gnawable pie crust made from bread dough (‘Cos it’s healthier’, he says).

This was served with fried colcannon – he cooked down some onions and cabbage, and baked two potatoes before scooping out the mash, mixing it with the veg and some peas, and frying the lot like a bubble and squeak. Oh my word so tasty – hot and crispy with lovely crunchy pie crust and herby soft filling – just what the doctor ordered. And we have so much left for lunch tomorrow! 🙂

We’ve just finished by sharing the peanut cookie that I bought at Planet Organic at the weekend – the flavour was great, really nice and nutty, but the texture was a bit odd – more like a gingerbread biscuit, with a slightly shiny/waxy feel to the surface. I wonder how they made it?