There’s nothing like starting the day with fresh bread – or waking up to a flat full of its warm, floury smell. I’m so glad we thought to put the breadmaker on last night (even if it did mean Si having to get out of the nice cosy bed to do it – sorry, Si!), it created a tasty and perfectly vegan-friendly breakfast – and the lovely crusty loaf that Si made, combining white and brown flour, semolina, and masa harina, was absolutely cracking.

Today we were off visiting, heading deep into south London to see our friend’s new house and relatively new baby, and on our way we popped into Wilko’s to pick up some jars for the green chilli jam we’re planning to make tomorrow. Last Veganuary I found being a vegan visitor quite awkward, but this time we planned ahead, packing a little bottle of cashew milk in my rucksack, and warning Ben not to factor us into his baking plans.

It was lots of fun! True, we couldn’t partake of the carrot cake that had been baked for the rest of the group (ordinarily, my favourite… weep…), or the chocolates or port that were offered later, but we did have a very lovely cuppa and a much-needed catch up, and Ben had kindly sourced some bourbon biscuit equivalents that were vegan-friendly. Couldn’t stay too late, though, as we had ambitious dinner plans that we wanted to get back to: Simon’s Mexican-spiced pumpkin wellington!

It all started with the half pumpkin we bought from the local market – Si cut off a good chunk of this and diced it nice and small, mixing it with smoked paprika, chipotle tabasco, and a little passata before roasting it in the oven (covered with tinfoil) for 20 minutes – so that it was soft and a little broken down, but not mushy. At the bottom of the oven we also placed two sweet potatoes and an onion to roast gently until everything else was done. 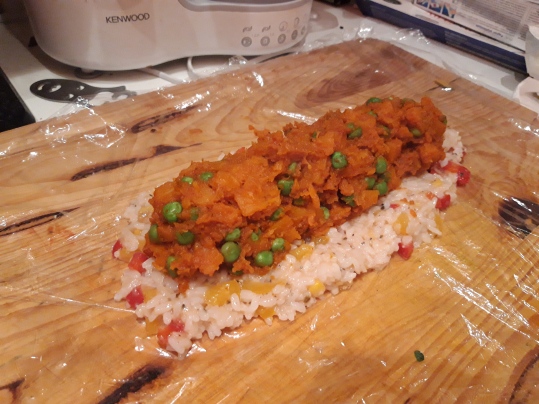 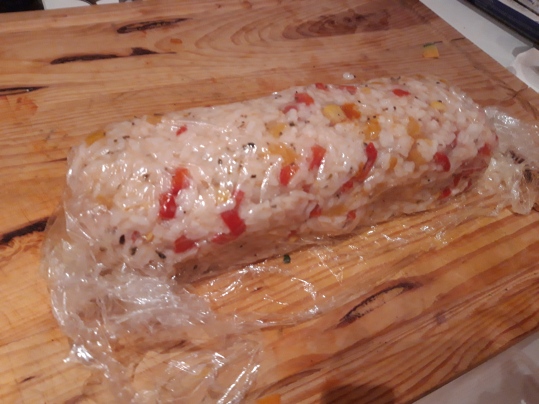 Separately, he cooked a pan of sushi rice, drained it, and mixed in salt and pepper, diced yellow and red bell peppers, sweetcorn, and a bit of tomato puree. We also mixed some peas into the roasted pumpkin, and left both to cool.

Once the heat had gone out of the rice and the pumpkin, we made a bed of rice on a sheet of clingfilm, shaped the pumpkin into a log on top of that, and then carefully moulded the rest of the rice around it until the pumpkin was completely coated. That done, we bundled the cylinder in clingfilm and put it in the freezer for just a few minutes to chill. 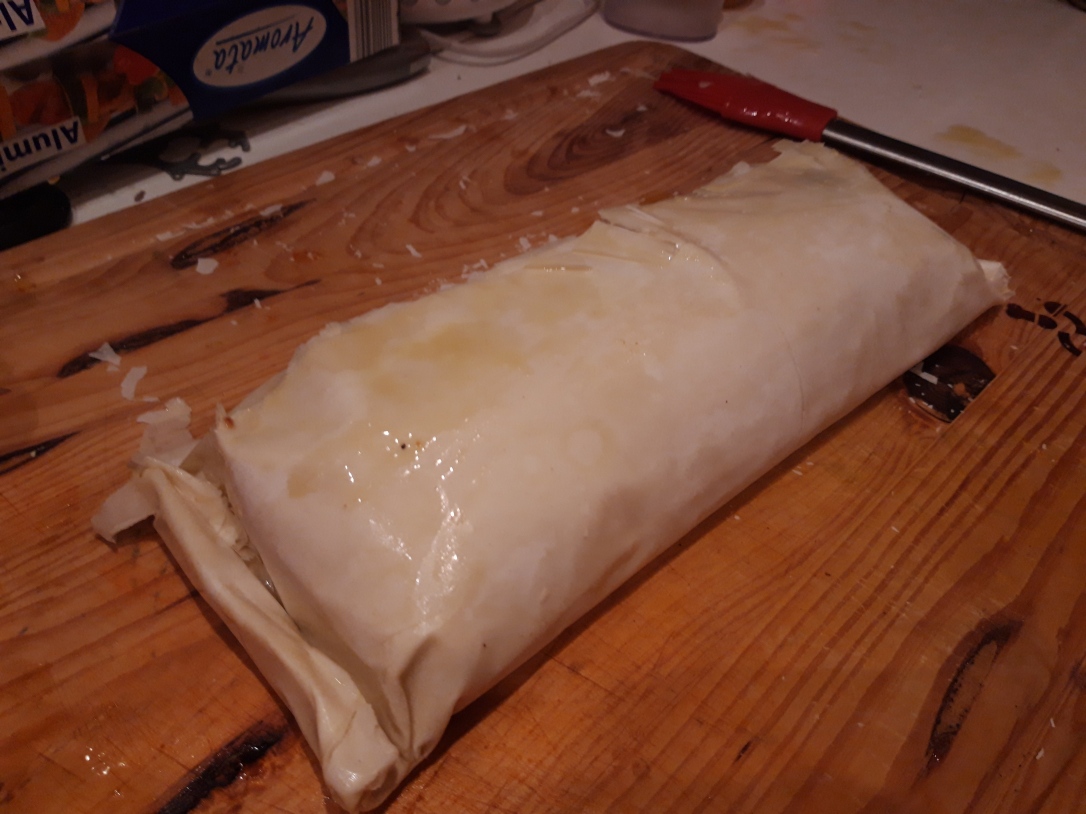 When our little bundle was nice and firm, we layered up four sheets of filo pastry (brushing each with olive oil), placed the rice log in the middle of it, peeled away the clingfilm, and bundled it up in a beautiful pastry parcel that went into the oven for 30 minutes. 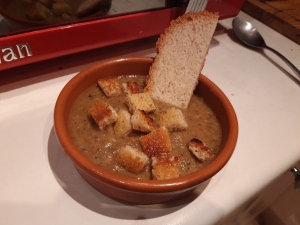 While the pastry cooked, we (by now, starving!) had a little appetiser of the last of yesterday’s broccoli/cauliflower/garlic soup, with some nice toasty croutons on top – it was just as tasty reheated as it was when it was fresh yesterday – I am definitely making this again!

We could hardly wait for half an hour to pass, though, and when the timer pinged and we opened the oven, presto change-o: flaky crispy beautifulness. The wellington looked and smelled amazing! Keeping the pastry warm in the oven, we took out the roasted onion and sweet potatoes, pureed them in the food processor with a little cashew milk and a dollop of tamarind, and mixed them with snipped spring onions to create a lovely bed for a hearty slice of pastry goodness. Double points to Si for not even flinching when my first response to trying the mash was ‘You know, it almost tastes a bit like Monster Munch’… 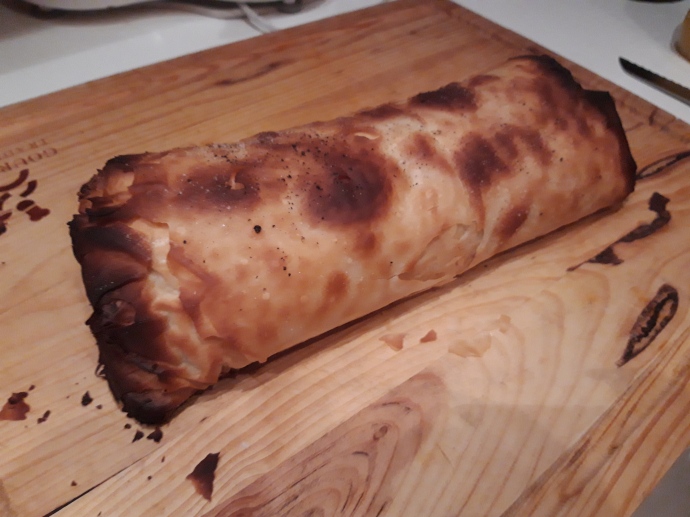 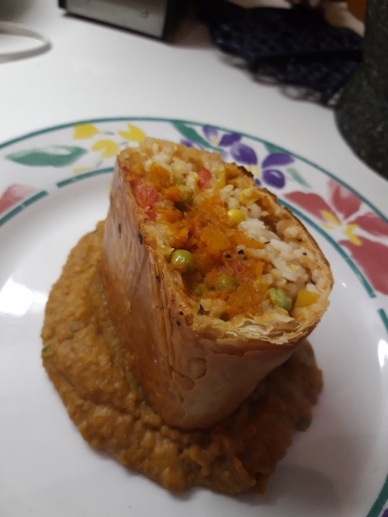 It was a real hit: crisp flaky pastry gave way to sticky, veg-packed rice and gorgeous smokey soft pumpkin, and the sweet puree underneath complimented the crunchy outside perfectly. I think this is one of my favourite things we have made in any vegan month!