Our first morning of Jones waking up in his new home, and it was a horribly early one! We were off to Wokingham of all places for a meeting to do with our volunteer am dram stuff.
At the station I was craving breakfast and struggling to find anything vegan that wasn’t a sandwich. Jones wandered off to gaze longingly at the Burger King menu… and then he hit upon the genius idea of ordering a bag of mini hash browns. Glorious greasy breakfast joy!

At the meeting, vegans weren’t particularly catered for – there were chocolates and yummy looking cakelets but with a sigh (of virtue, honest!) we managed to abstain. 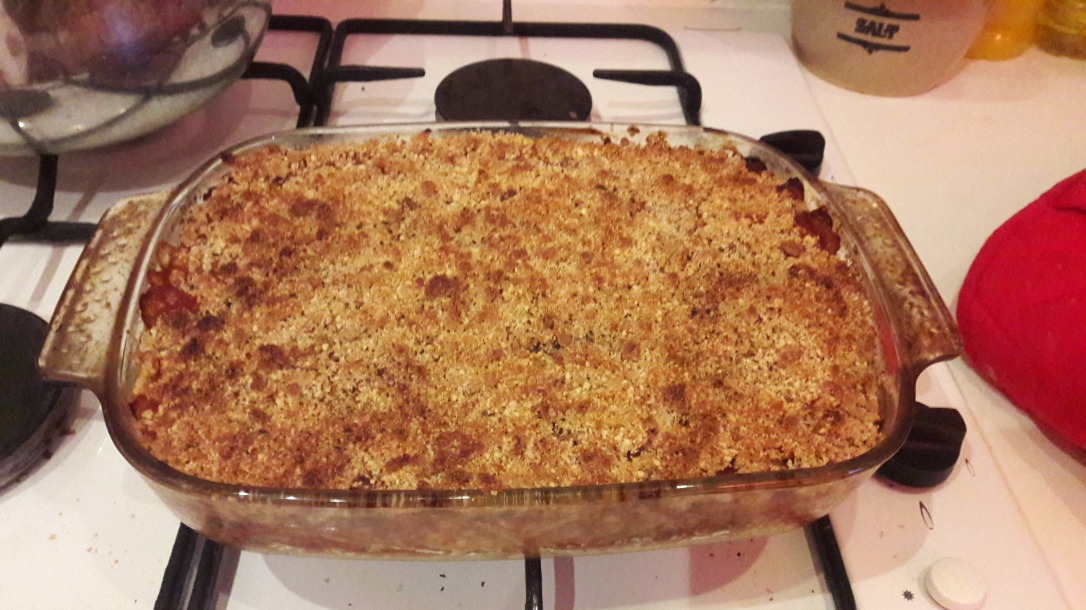 This being very much an on the go day I don’t have many formal meals to report, but Jones did knock together a very tasty macaroni and soya mince pasta bake for dinner, topped with breadcrumbs and Violife vegan parmesan – which smells and tastes exactly like the real thing!

Pudding was a blackcurrant ‘cheesecake’ – alas not the ‘free from’ chocolate mousse that I had pounced on at the supermarket, since when I got it to the till I realised it was free from gluten and dairy, but alas not eggs. Boo and hiss!

The cheesecake was OK… didn’t like the tart and gloopy fruit topping it, but the cheesecake and base bits were nicer. But crowning the day was another bottle of prosecco to toast Jones’ moving in and the progress we have made with unpacking (contrary to Jones’ protests, we have not put all of his stuff in the attic!)… and then a little apricot wine… and then falling asleep on the sofa…