This morning raised a very important question: how do you rescue Si from the mother of all hangovers* when you can’t cook him a medicinal Full English? By making him a Full Vegan, of course!

Challenge accepted, I set about knocking together the ingredients that sis and I sourced yesterday: hash browns, veggie sausages, roasted vine tomatoes, sauteed mushrooms – so far, so straightforward! I also made a little potato hash using half a potato diced small, and some finely sliced onion. After blasting the potato, salt, and pepper for a couple of minutes in the microwave, it and the onion went into a frying pan with a little vegan spread, and once it had started to brown I added a little garlic powder and a teaspoon of smoked paprika. When all of the above had five minutes left to go, I popped a pan of baked beans on the hob, and a couple of slices of sourdough into the toaster. Plated up with a few slices of avocado and accompanied with a big mug of tea, I think it did the trick! Si ate the lot, and though he returned to bed for another snooze soon afterwards, he was looking a lot brighter. Mission accomplished! 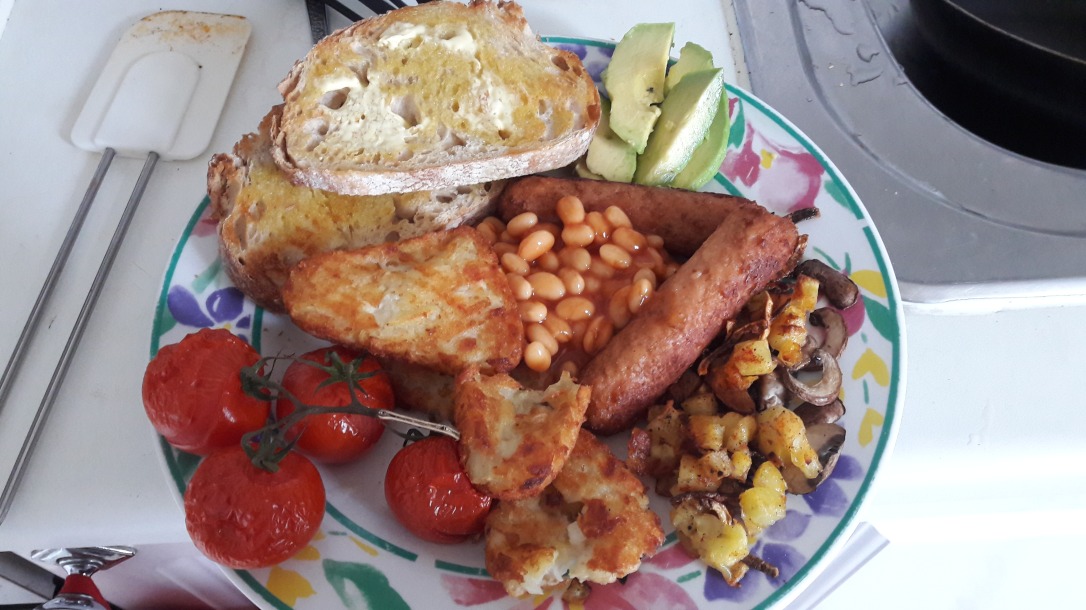 A nap and a Coke Zero later, and Si was up and bouncing again. Good, because we had a friend coming round at 2! Our guest is a vegetarian, so we had lots of interesting chat about what we’re up to. He was really interested to try the cashew milk in his tea too – though when we made him a coffee later we had to use an emergency carton of UHT (squirrelled away from a hotel stay) as three attempts to add cashew milk ended in it splitting. Wonder why?

After our breakfast feast we didn’t really need lunch (though Si finished the last of the leftover mushroom stroganoff in the fridge), but before we popped out to a friend’s birthday, Si made me a little bowl of sauteed potato and mushrooms, cooked with thyme and topped with a dollop of vegan yoghurt mixed with garlic powder. Very tasty!

This evening we were out in Camden – and man alive, once we’re allowed dairy again we are going back, because there is the most amazing sweetshop opposite Camden Town station and we want to eat ALL of the Oreo and Reeses’ stuff! After a quick pop to Itsu to find something for Si to eat, we made our way to the birthday party. The festivities were in a cool but VERY NOISY (‘What was that?’ ‘Very noisy!’ ‘I can’t hear you!’ ‘I said… oh never mind…’) cocktail bar – and while Si wasn’t really back in drinking mode anyway, we did find it a little dull being the only ones not boozing. I know, I know, we should be able to socialise without drinking – but as everyone else got louder and tipsier, being the only sober ones wasn’t all that fun. Plus the cocktail menu looked amazing!

Hey ho… after a thoroughly virtuous pint of Coke (me) and a lime and soda (Si), I plucked up the courage to ask the super-hip barman (he had a green ponytail and ALL the piercings!) if they did non-alcoholic cocktails (there were none on the menu). While I watched he squeezed a bunch of fruit syrups and juices together and added a lot of ice – I never found out what went into it as the bar was so noisy and he was straight onto another member of the crowd waiting to be served, but there was red and yellow in it, it was topped with a raspberry, and the main flavour was strawberry. It was pretty yummy!

We didn’t stay late at the party – we were getting a bit too left behind by the drinkers for conversation to be fun – but at home we’ve had a lot of fun doing a bit of planning for our upcoming Mexico trip, eating toast, and watching one of our favourite Netflix shows, Nailed It. Here’s to a good night’s sleep and a livelier tomorrow! I’ll drink to that (with chocolate-flavoured almond milk)…

*For those of you who haven’t read our previous post, yesterday Si was at a beer festival, one of our agreed days off teetotalism as he’d already bought a ticket before we decided to do this month.