Today was a Simon cooking day – always nice to come home to a hot meal! And a pretty tasty one too. But I’m getting ahead of myself.

It’s been another test of willpower – but what doesn’t kill me/drive me to despair can only make me stronger! Today, not only were there bags of Joy Fills biscuits in the office – which I’ve been cooing over since I spotted them on a bus stop and NO the Oreo ones are not vegan, boo and hiss! – but it was also an office birthday and they had brought in the most beautiful chocolate cake! But not one crumb did I nom! Honestly, I deserve a medal.

Lunch today was a high street trawl because we accidentally ate all of the coronation chickpeas yesterday, so rather than do my usual potter around M&S, I thought I could do worse than have a nosy in the local healthy food shop, As Nature Intended. There’s got to be something vegan in there, I thought!

As it turned out, the shop put more emphasis on organic than vegan in their organisation, and it took a bit more nosing around than I expected to find something lunchy – none of the ‘food to go’ really worked. But I’d committed to sourcing something from there, rather than going for a safe supermarket option – and in the end I found a bag of lentil chips and a pot of artichoke dip. ‘That’ll do!’ I thought. Eaten on a bench in the sun, the chips were beautiful, and the dip was perfectly nice though perhaps not as filling as I would have hoped. By the time I got home I was looking forward to my dinner!

And what had Si made? Sweetcorn fritters with a white bean and garlic dip, some lovely ripe cherry tomatoes with fresh coriander and chilli, homemade onion flatbreads, and beetroot roasted in a salt crust. It was amazing! The fritters were lovely and juicy, and the beetroot had a wonderful earthy, subtly salty flavour. I could have eaten three times as many of them!

The fritters were made from two cups of sweetcorn, a cup of homemade creamed corn (sweetcorn and almond milk), cornmeal, flour, paprika, salt and pepper, parsley, chilli, and spring onion, all mixed up to make a batter that thickened beautifully in the pan.

For the salt crust, Si mixed flour and water with lots of salt to make a very (inedibly) salty dough. He rolled this out, top and tailed the beetroots, wrapped them in the dough and made sure they were sealed, then roasted at 200 for 50 minutes. When they came out, you just crack open the hard crust and you’re away!

The dip was cannelini beans blitzed with parsley, a bit of lime juice, and a whole head of roasted garlic, plus plenty of salt. Some little pomodorino tomatoes, halved and served with spring onion and coriander, made  gorgeous salsa, and the wholemeal onion flatbreads were the perfect medium to scoop it all into my mouth. Well done Jones! 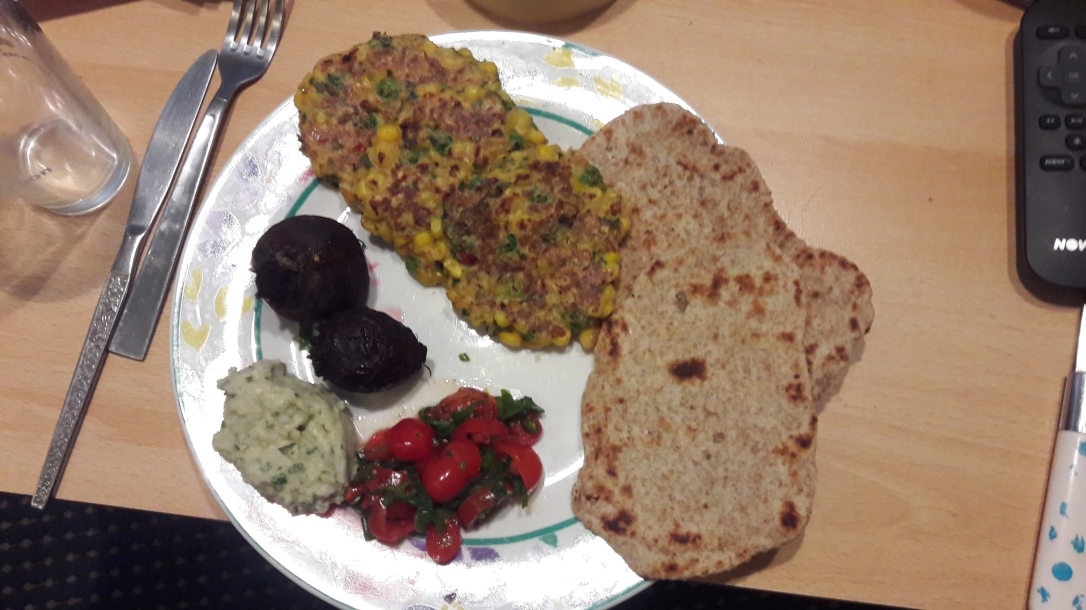 3 thoughts on “Day four: You can’t stop the beets!”